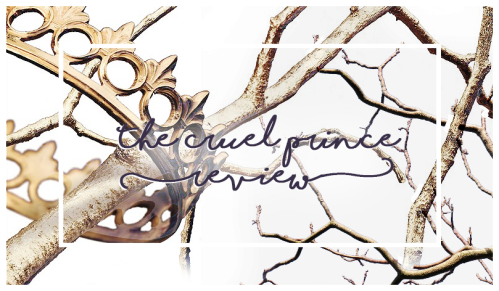 Of course I want to be like them. They’re beautiful as blades forged in some divine fire. They will live forever.

And Cardan is even more beautiful than the rest. I hate him more than all the others. I hate him so much that sometimes when I look at him, I can hardly breathe.

Jude was seven when her parents were murdered and she and her two sisters were stolen away to live in the treacherous High Court of Faerie. Ten years later, Jude wants nothing more than to belong there, despite her mortality. But many of the fey despise humans. Especially Prince Cardan, the youngest and wickedest son of the High King.

To win a place at the Court, she must defy him–and face the consequences.

As Jude becomes more deeply embroiled in palace intrigues and deceptions, she discovers her own capacity for trickery and bloodshed. But as betrayal threatens to drown the Courts of Faerie in violence, Jude will need to risk her life in a dangerous alliance to save her sisters, and Faerie itself.

This was the first book of Holly Black I’ve read. Apparently, she writes a lot of faerie stories and fae types are something I didn’t really adventure into much. I’ve read a small amount of faerie books and haven’t enjoyed any yet, so I really hoped that this would be different. Although, I didn’t enjoy the whole ride, it was still an okay read.

This book was so over-hyped I was sure I couldn’t get it wrong by picking it up. And half-through reading it, I was still sure it was a pretty good book. But the ending kinda threw me off and made me regret a little bit to have read this book. I still bought the sequel, so hopefully I’ll try to motivate myself to read it 🤷‍♀️. Unfortunately, I bought the sequel before finishing the book and the ending kinda made me not want to continue the series, lol.

I kinda knew there was the “enemy to lover” trope going in the book, and I’m kind of a sucker for that. It’s one of the main reason why I wanted to read this book in the first place. I was expecting a romantic storyline that would make me swoon but it wasn’t really the case, and that’s okay, too. Good stories don’t always need a big romantic setting or love triangles, it’s just something that I prefer personally. However, I wasn’t really feeling the “love” in this book between the two characters that the story was hinting at.

Jude was an okay main character. I liked how independent she was and how she was not afraid of standing up to herself, unlike her sister, Taryn. She knows what she wants and she isn’t afraid of doing what it takes to get it. Although she isn’t of this world, she desperately wants to be a part of it, because it’s all she’s known her whole life.

I really disliked Taryn and how childish and always afraid of everything she was. I can understand that she just wanted to protect herself and her family, but jeez, can you be more boring than that? I just didn’t like how she wanted to be so “proper” and “ladylike” while kinda being two-faced towards her sister and she was just annoying, lol.

Aside from her, I thought the relationship that Jude had with her father was interesting. You can clearly see in some parts she definitely hated him for all the pain he caused them, but some part of her also longed for his approval and cared for him.

As of Cardan… well, I think I’m not feeling him so much. I hated how bullying he was towards Jude and all that because had some sort of feelings for her and felt conflicted about them. It’s like when a young boy wants to show a girl he likes her by pulling her pigtails. Instead now he shows it by literally trying to get her killed????? I mean, sure, that’s cute? I know it’s supposed to fit into the cruel prince character, but it just confuses me how a smart girl like Jude can find a guy like Cardan that attractive. Hopefully in the sequel, they get to work on that relationship a bit more.

The beginning was a lot of world building and I had a hard time getting through it, ngl. Then, I got into a good part of the story where it flowed really well and I got through a chunky size of the book. Then, coming towards the ending, I was kind of expecting a big plot twisting ending that would blow my mind off, but I was left extremely disappointed. I think I had such high expectations from other reviews I had read that the actual ending didn’t quite reach what I had in mind. It’s still an interesting way to end the first book and I’m kind of curious on how it with carry on in the sequel.

I’m a bit disappointed that I wasn’t able to enjoy this book as much as most readers but I think it just made me realize that the faerie genre just isn’t made for me. I’ll still try to read the sequel since I already bought it, so might as well. Hopefully it’ll be a better follow-up to this story.

💍 @fx_legault
Hey 👋
#TB to the most beautiful bride ever 😍 and the only time @fx_legault and I looked presentable last summer 😂
It’s finally Christmas time 😍🎄
Watch me be all ??? when @fx_legault ults after the enemy team dies 😂😂😂 #overwatch #dva #moira
Apple picking with the fam. ➡️ to see @fx_legault pretending to pick an apple 😂🍎. 📸: @carb0709
Getting ready to smack yo face off 🥊🎸 👔: @classytuxedos
👩‍❤️‍👨 #katbaowedding 👗: @boutique1861 👔: @classytuxedos
Alma mater 🎓 #collationdesgrades #collationfsi2019 #udem #graduationudem2019 #sciencesinfirmieres